The national rowing championships, a 3-day event held in Cork in mid-July every year, is the pinacle of the irish domestic rowing calendar, where every oarsperson / crew in the country strives to peak in the hopes of earning the title 'National Champion'. Obviously, competition is at its stiffest in this event, which made for many exciting races and nail-biting finishes. The CIRC crews did their club proud with their performances and even though not every Jes entry achieved a medal, they certainly impressed on the Irish rowing community the high standard of Jes rowing. Almost perfect rowing conditions prevailed on Friday but a stiff tail-wind on Saturday and Sunday made for some very fast race times. Some light drizzle on Sunday helped settle the dust but did little to dampen the enthusiasm of the competitors and spectators alike.

Huge congratulations to Tom Maye (J14 Single Scull) and to the J16 8+ crew of Gavin Dempsey (bow), Alex Morales-Glynn, Ultan O'Toole, Niall Cahalan, Eamonn O'Tuathaill, Aaron Burke, Oliver Kelly, Mark Ward (Stroke) and Paul Tannion (cox), who are National Champions for 2017-18. In one of the most exciting races of the weekend, the CIRC J16 8+ crew came from behind to snatch the gold medal from Fermoy in the last second of the race. The finish line is deceptive on this course, so both crews celebrated the win, convinced that they had won, up until the official announcement declared the Jes to be the winners. This crew has now officially been unbeaten all year long.CIRC J16 8+ winning the championship (Courtesy of Claire O'Tuathail)

Having won their heat 2.5 hours previously, Caoileann NicDhonnach (stroke), Elise Carney-Frazier, Roisín Gavin, and Ciara Walsh (bow), crewed the WJ18 4- to a strong 2nd place on Friday - only 2 seconds behind the winners and over 6 seconds ahead of the crew in 3rd place.

On Saturday; the MJ4+ of Sam Reidy (stroke), Thomas Hume, Caoimhín Conway, Luke Flynn (bow), and Paul Tannion (cox); won Silver, coming from 5th place at the 1k mark to finish 7 seconds behind the winner and 1 second ahead of the crew in 3rd place.

Emma Ryder (WJ15 1x) led from the start and had a 3-lengths on her nearest oponent in this single sculls final until a recent shoulder injury flared up again with 200 metres to go in the 1.5k race. The pain and muscle spasms in her shoulder and back caused her to slow significantly and she was overtaken, coming in almost 7 seconds behind the winner but still 12 second ahead of 3rd in this 6-person race. Unfortunately, no silver or bronze medals are awarded in this age category. Emma had deliberately been entered in only 1 race for champs, due to her ongoing recovery from this injury and she was extremely disappointed that her shoulder didn't hold up for the entire race.

Kate Hume (WJ15 1x) was in the fastest final, having unfortunately been drawn against an extremely strong Shandon sculler, who was part of two winning Club-level crews that weekend. Kate did extremely well to come in 2 lengths behind the winner and 2 lengths ahead of the sculler who came in third.

Sarah Trench (WJ15 1x) came third in her final, in spite of her footplate coming off, 200m into the 1.5k race. This seriously hampered her ability to row hard so it is a testament to her technique that she achieved such a good result, finishing ahead of 3 others, only 26 seconds behind the winner and 13 seconds behind 2nd place.

Our J18 sculler, Mark Ryder, was in the fastest heat in the Intermediate 1x and was beaten to the semi-final by the rowers who won Gold and Silver in this event. The third qualifier from this heat was the fastest loser of the semi-final, missing out on a place in the final by only 0.2 seconds. Mark's time would have won the previous heat outright but only 3 from each heat progressed. The CIRC J18 rower outraced one third of the other entrants in this category, which is a step above his current level. Almost exactly the same scenario occurred for him the previous day, in the J18 1x heats: Although he was faster than 15 of the 25 competitors and would have won the previous heat comfortably, his own heat was blisteringly fast - the pace being set by the eventual Junior 1x national champion.

The timetable worked against our Junior Mens and Women's pairs. The men's pair (Caoimhin Conway [stk] & Thomas Hume [bow]) had already participated in the the Heat, semi-final, and final of the Club 4's, earlier that morning and had just under 1 hour, after the Club 4 final, to recover before slipping in the pair. The womens junior pair of Caoileann NicDhonncha and Elise Carney-Frazier, who recently were selected to represent Ireland in the Coupe de Jeunesse in a few week's time, were fatigued from the WJ18 4- heat and final on Friday (where they came 2nd) and the WJ18 8+ final on Saturday. Despite this, they came 4th in their heat (with only 3 qualifying) with a time that would have beaten the winners of the only other heat by almost 19 seconds.

Tom Maye (MJ14 1x - pictured below) had the 4th fastest time of all the MJ15 scullers but unfortunately, due to the luck of the draw, came 3rd in his final on Friday. Tom went on to win the MJ14 1x event the following day.

Niall Martin (MJ15 1x) also came 3nd in his final - unfortunately no medals are awarded beyond 1st place until at least the Junior 16 categories.

Although many of our rowers were unlucky in this event, it was still a very successful end to what has been an extremely successful year for CIRC, with a total tally of 96 podium places over 15 events: 87 wins, 5 Silvers, and 4 Bronze medals. Congratulations and thanks to all our rowers, coaches, and parents and here's looking forward to even greater things next year.

Many parents and friends of the club were on hand to take pictures during this 3-day event but we have not received them all yet. Please follow the below link to see the images provided by Colette Gill and Evan Ryder. We hope to add more later. 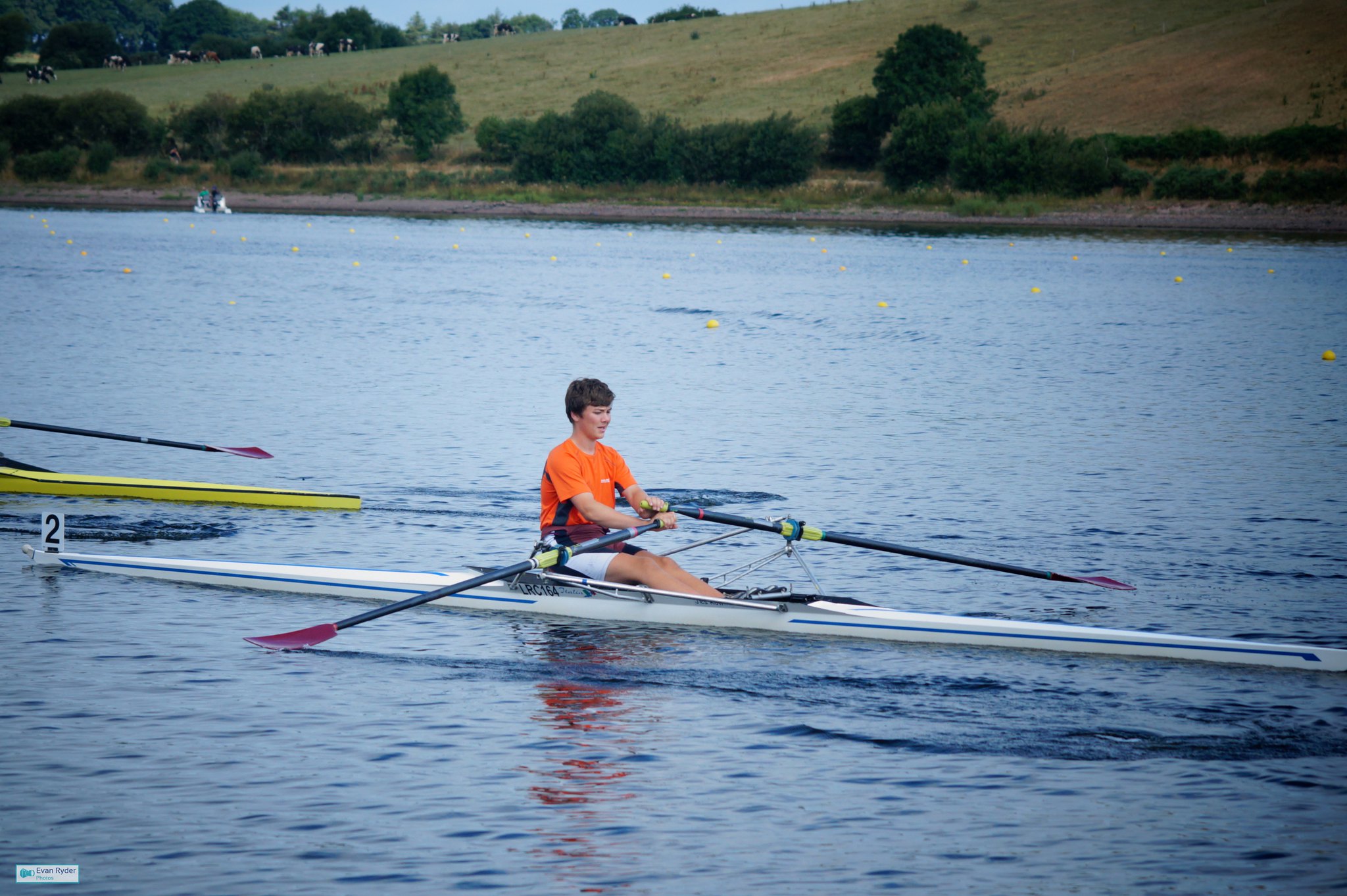